Although the Good Friday sub-committee has been formed some 20 years ago, the interest of the Club’s Members in the Good Friday Exhibition date back to much further than two decades. In this section, a historical overview shall be given so that one also understands the contribution of the band in these feasts, and from where it originated, till the first meetings in founding this sub-committee and organising the Getsemani exhibition.

The festivities for the Holy Week in Vittoriosa, from early in the eighteenth century, included a procession with statues representing the Passion of the Christ, which was done throughout the main streets of Vittoriosa. This custom, which most probably was introduced with the arrival of the Knights of Saint John, were always accompanied by a form of music.

As from early the nineteenth century, a military band was taking part in the Good Friday procession, mainly because there was not a local one. This participation was halted in 1862, since it was prohibited from the Curia. But it seems that in Birgu, the participation of some type of band was not halted since it is confirmed that in 1867 a band directed by Domenico Amore took part in that year’s procession.

However, it seems that the Curia prohibition on military bands was not in effect in 1873. Local media reports show that during that year’s Good Friday procession in Vittoriosa, a funeral composition of Mro Privitera, composed for this occasion, was played by the RMF Artillery Band. This musical piece was given great importance, and may hint that such musical pieces, or funeral marches, was still rare at the time. It may also be the case that this was the first in time that this type of music was performed in Vittoriosa. This is proven from the fact that Dr Zammit had felt the necessity to praise Mro Privitera through a dedicated epigram in Latin, and in its introduction explained why he was doing so.

Throughout the years, following the fact that in 1883, the band club in this city was getting stronger, it must be said that its participation in this day was confirmed year after year. This participation was even stronger under the baton of Mro Gaetano Grech since during his tenure, the band was also performing a musical programme on Palm Sunday. One of these programmes which remained popular for years to come was the one held in 1905, where the band played music all composed by himself. As was his custom, Mro Grech directed the band without any score whatsoever and after every musical piece, he received an ovation from all those present. The best music piece to be played was the symphony Pensiero Melanconico, for which he gained so much fame that the Accademia Reale di Bellini of Catania asked him to provide a copy.

The band always performed classical sacred compositions together with funeral marches, just as was the case in 1891. On that day, Mro Grech performed what Mro Abela did two years before him, the playing of Stabat Mater of Rossini. The same thing was done by Mro Pacifico Scicluna when he was appointed band conductor in the 30s. When in 1914 Mro Giovanni Giumarra was appointed as band conductor, he introduced new funeral marches composed by himself such as Dolore, Mesto Ricordo, Sul Golgota, Fatalita` and others, most of which are still played today. However, this changed once again when Mro Carl Maria Artz was appointed as Maestro. Together with the traditional funeral marches and traditional sacred compositions, he added others from Schubert, Beethoven, Chopin and Amadei, which were rarely played in Malta. This was a time when the band was passing one of its best moments, proven by the fact that thousands of people used to follow this band.

Even in transitional times, between the termination of a Maestro and the appointment of another, the band succeeded in keeping this annual appointment. In fact, this was case in 1910 when the band was temporarily under the baton of Mro Giuseppe Frendo. For this occasion, Mro Frendo took the opportunity to play for the first time 2 funeral marches composed by himself – Viaggio al Calvario and Le Tenebre. The same thing was done by Mro Pacifico Scicluna in 1924, following the termination of the second spell of Mro Giumarra in Vittoriosa. During that year, Mro Scicluna took the opportunity to play the march of Mro Lorenzo Galea Sulla Tomba di Mio Fratello, which was well received from all those present.

Following the end of World War II, through the work of Mro Pacifico Scicluna and the Secretary Beneditto Dalmas, the Saint Lawrence Band Club re-established itself once again. It had enough bandsmen to participate once again in the first procession held after the war, in 1944. The band continued to do so and is still doing so till today, even if this means a great deal of expenditure. An exception was done for the processions of 1962 and 1963, when due to an argument between the central committee and the church, the Good Friday exhibition was accompanied by the King’s Own Band Club. On that day, this band club from Valletta had written a new page in its history since it was probably the first time that it accompanied a Good Friday procession with funeral marches found in its archives.

During the holy week, the Saint Lawrence Band Club does not only participate by accompanying a procession. In 1994, a group of enthusiasts from the Sezzjoni Żgħażagħ Palmiżi transformed the concert hall in the club in an exhibition where the traditional Apostles table on Jewish style was put up, together with small statues, pictures and other things relating to Good Friday.

The following year, the Getsemani Exhibition was created with the introduction of a life size statue representing Christ in Gethsemane, the work of artist Michael Camilleri Cauchi. In order to hold the custom of Vittoriosa, namely real clothes on statues, clothes were done and sewed by Concetta and Marianne Pule`. The garden atmosphere, created by the youths, could be described as perfect and this was the praise of all the people who visited the exhibition. This gave the youths more courage for further expansion in later years, and in the year 2000, the three apostles were added – Peter, John and James, a work of art of the same artist and clothes from the same sewers.

The amount of people who visited the exhibition continued to increase year after year and this was also accompanied by the organiser will to further expand the exhibition. In fact, in 2001, Judah was introduced in this representation, while in 2002 another 2 figures were increased. These were the Priest and a soldier. In 2007, a new scene was inaugurated, representing Christ’s beating, composed of three figures. This was the work of artist Andrew Bugeja from Vittoriosa. In 2008, the same artist delivered the entrance of Jesus in Jerusalem, including joyous people and skeptic priests.

Together with these, the Apostles table on Jewish Style 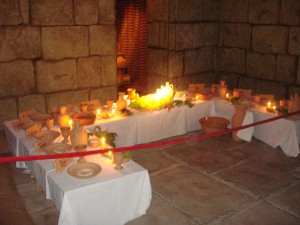 is still being put up. The aim of this scene was to keep it as close as possible to the origina
l. In fact, one can see a room styled on old times with pottery items, low light coming from small flames and also an adaptable carpet.

From the beginning of the Getsemani Exhibition, the organisers always sought to have an opening reflecting the high standard of this exhibition. Activities varied from a musical performance by the Saint Lawrence Band Club, or representations from the youths of the musical Jesus Christ Superstar such as The Last Supper, Gethsemane and Hosanna. In 2001, with the collaboration and organisers of the Żebbuġ Good Friday procession, before the exhibition was opened, Vittoriosa hosted a number of youths dressed as R

oman Soldiers, with two even on horses, marching from Main Gate Street till the main square to create a perfect atmosphere. Also, the exhibition was always opened by VIPs such as Presidents, Prime Ministers and Ministers. Together with this, a high number of Member of Parliament always visited and attended this exhibition.

Innovative was the inauguration of the 2005 exhibition, when the central committee of the society, through CDs, took the opportunity of exposing the works of two perso

nalities form Vittoriosa which were successful in the musical scene – Kan Luigi Fenech (1837 – 1905) and soprano Miriam Gauci, who has an international fame. With some interpretations of Kan Luigi Fenech and the interpretation of a number of aria of Gauci, the musicologist Joe Vella Bondin explained to all those present the background and also the nature of other sacred compositions such as those of Pace, Pergolesi and Palestrina.
For a number of years, Profs Manoel Pirotta was the band director of two orchestras who took part in the inauguration of the exhibition. The orchestras performed music inside the church, by the church and even in the club. In 2007, he directed the Euro Academy Orchestra and in the following years, he directed the University Junior College Orchestra. The Saint Lawrence Band Club also performed musical programmes of its own in other editions of the exhibition and funeral marches well played inside the club and also in the Oratory of the Church.

The sub-committee members always thought and projected how the exhibition shall be further expanded, and it took some creativity for t 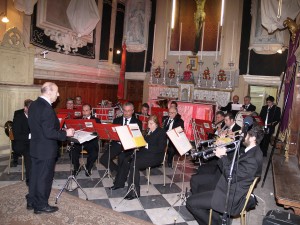 he latest scene to be put up. In fact, in this new scene, there is Judah agreeing with the Chief priest and receiving the money. This new scene was inaugurated in 2012 and has two statues, the work of artist Andrew Bugeja. This creativity of the members shall be admired since this new scene is set up in the balcony overlooking the internal yard, and a water tight structure had to be erected.

The sub-committee members always thought and projected how the exhibition shall be further expanded, and it took some creativity for the latest scene to be put up. In fact, in this new scene, there is Judah agreeing with the Chief priest and receiving the money. This new scene was inaugurated in 2012 and has two statues, the work of artist Andrew Bugeja. This creativity of the members shall be admired since this new scene is set up in the balcony overlooking the internal yard, and a water tight structure had to be erected.

In 2015 and 2016, the Gethsemane Exhibition was not put up as like in previous years. The Central Committee, together with the Good Friday sub-committee of the band club, decided with responsibility that the exhibition shall not be organised, since the preparations would have meant a disruption of months to the music lessons given every week. The Central Committee made attempts with other organisations to try to re-locate the exhibition to other venues in Vittoriosa, but these talks proved futile and to no avail. In this regard, in 2017, the Central Committee together with the Good Friday sub-committee decided that the Gethsemane Exhibition shall be put up in the club’s ground floor, albeit on a reduced scale. In fact, the scene showing Christ’s beating was put up in the main entrance of the Club, while parts of the Gethsemane where put up in the committee’s room, situated on the left opposite the Bar. No one expected that this experiment would be the huge success which it was, and everyone agreed that this new arrangement heavily contributed to the particular atmosphere of Good Friday. 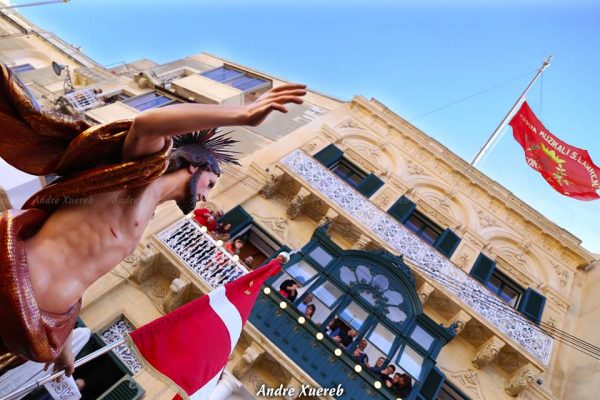 ticipation in the celebration of Easter goes back whole centuries. The participation of a band and even two during the procession of the risen Christ is confirmed by Kan. Lanzon in his diary dating 1804. Thus, what began years back was continued with all the bands which were formed as years passed by.

Our eldest confirm the participation of this band in this feast from the times that its name was L’Unione, by playing festive marches accompanying the statue of risen Christ. This is still done till today with the playing of marches and waltzes on this occasion. This manifestation, associated with joy, is very popular in Malta and thousands join us on a yearly basis in this great celebration.