The Billiards hall, as it is known in Birgu, has always attracted a large number of people. In fact, even decades ago, young people were attending this hall. It must be said that some stood out more than others in this popular game, and even went to distinguish themse

After this hall had to be restored, it was inaugurated during the commemorations taking place in August 1983, when the club celebrated its Hundred Years anniversary of the Society and its Band. The Billiards or Snooker Hall was inaugurated with the final of a snooker competition which was launched a few weeks earlier. For this occasion, the table was polished, the felt changed and new sticks and balls were purchased.

This prompted renewed interest by numerous young people which began attending the hall once again. This renewed interest quickly started showing encouraging results. Over the years, interest in the sport continued increasing so that in 1991 another table was purchased. Following a renovation of the old table, an inauguration for both was held in September of that year, with an exhibition match between Paul Mifsud, winner of the World Billiards Championship and a prominent player in this game, Victor Ellul.

Interest continued to increase and as Lawrence Scicluna, Director of the Hall, and Lawrence Farrugia, the following director, assisted by other members, began organising competitions, which have been and continue to be numerous. Among the most attended competition was the Centenary Competition in December 1990, which was won by Paul Schembri and another one held four months later, for which 31 competitors signed up. The final was contested between Joe Farrugia and Attard Walter, the latter ending up the winner. It also stimulated some interest in the local media where reports and photo finalists were featured in newspapers Ín-Nazzjon’ of 10 April 1991 and in The Times of ten days later.

The Snooker Hall was also used for charity purposes. Among these occasions, one can mention the the Snooker marathon organised in October 2000 in aid of the Eden Foundation, which was highlighted in one of the newspapers. In December 2001, another marathon was organised in aid of Dar tal-Providenza and in February 2003, another marathon was held in aid of Hospace Movement. Revenue from these marathons was encouraging and Mr Lawrence Farrugia, Director of the Hall and organiser of these marathons, was certainly satisfied with the answer and participation of the local enthusiasts of this game.

The Snooker hall is probably the most sought-after place in the club, and further works were carried out in 1998 to restore and modernise this hall to attract more members. Maintenance works were performed on some of the stones that had started decaying, the tables were refurbished and  also existing furniture was restored whilst new ones were added. The hall was also equipped with all tools needed for this popular game.

The Billiards Hall sub-committee continued to organise regular competitions. One worth mentioning in recent years is the Snooker Competition organised as part of the celebrations of 125th years anniversary of the band club, and also the one day Tournament held on 31 March 2009. The objective of this sub-committee is that to bring more youths to the club, whilst offering a good space  for those who attend the club where to practice their hobby. It does so mainly by investing the profits made by the competitions in the hall itself to tackle the needs as it arises. 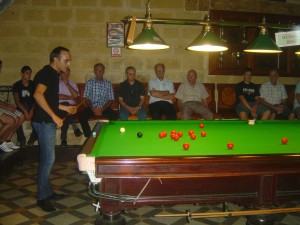 In 2010, the main snooker table needed to undergo some repairs and maintenance, whilst new felt and new Matunelli needed to be fit. This table was reopened on Friday 15 October. For this occasion, the sub-committee invited popular national players Alex Borg and Duncan Bezzina for an exhibition match as part of a small activity of this reopening. Faced with the attendance of some members and enthusiasts of this game who frequent this hall regularly, Alex Borg and Duncan Bezzina provided those present with a spectacular match. This activity ended with a short speech by the club’s President, presentations and also a reception. 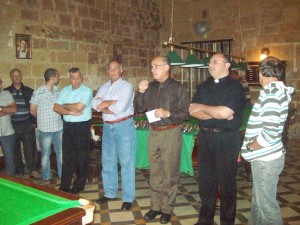 In October 2011, this sub-committee organised another Snooker Marathon from Friday 28 to Sunday 30 October. This marathon of 50 hours was organised in aid of the Marble Project which was being carried out in the Church of Saint Lawrence in Vittoriosa. This project was ambitious and as Birgu citizens, the club felt that it could be of help through this marathon. With the participation of a good number of members, this marathon has sent a positive message to the people of Vittoriosa so that this project could be done with the participation of all the community. After that marathon, the President of the Society Mr. Lawrence V. Farrugia presented a check to the parish priest where he thanked all those who took part in this marathon declaring it a success. 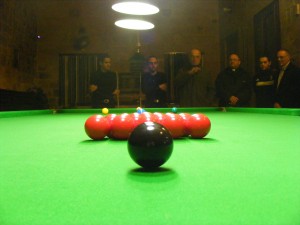 After the works which were carried out in 2010, the Snooker tabled again needed further maintenance. The works were carried out in the beginning of 2014. Professional restoration as well as fitting of new felt on both tables was carried out, and the hall was reopened again on Friday 7 February, 2014. For this occasion, an exhibition match between popular national players Duncan Bezzina and Aaron Busuttil was organised. This opening was once again well attended, and the club invited the Honorary President Joseph Scicluna to give the first shot, after donating the felt to the Society. The blessings of the renovated tables were made by the Archpriest of the Society and of Vittoriosa Father Joe Cilia. After this opening, a reception was held while Bezzina and Busuttil were given a small token in commemoration of this occasion. 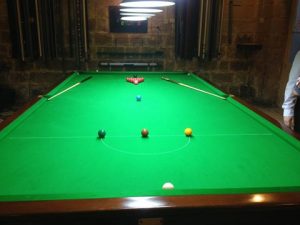 As from October 2015, the Snooker sub-committee began planning and organising activities in order to gather funds for future projects in the Hall. The ultimate aim was a total restoration and further investment in equipment. To this aim, the sub-committee organised a 48 hour Snooker Marathon during the Christmas period. This marathon was opened by the Hon. Minister Joe Mizzi, and the funds gathered provided the necessary courage and push to the sub committee to do the planned works. Some of the works included, new ‘matunelli’ with all the finishes touches for the Members table, restoration of the old ‘matunelli’ and installment on the secondary table’ new felt for both tables; new lock for the players’ storage facilities; new scoreboard and an adequate wooden frame; 4 shelves to be used for cases and other equipment; glass shelve for further use and comfort; polishing of both tables and the old scoreboard new lighting and leveling of the secondary table.

Mr Mark Zammit contributed heavily in this investment, whilst Mr Lawrence Gonzi donated a new snooker set. Members of the sub-committee worked voluntarily in the carrying out of works, namely Mr Oscar Adami, Mr Lawrence Gonzi and Mr John Attard. In Summer 2016, further work were carried out on the side benches. The re-opening of the Hall was commemorated with an exhibition match between Mr Lawrence Gonzi, Mr Mark Zammit, Mr Chris Pisani and Mr John Attard, who all are members of the sub-committee. The Archpriest of Vittoriosa gave his blessings in this formal ceremony.