Following the decision taken to move the annual concert held on the occasion of the Feast of Saint Lawrence from 9th August to 7th August, in 2004 this concert was totally revamped. In fact, the sub-committee responsible solely for the band decided that in this concert, renowned singers, dancers and other animation shall be included. It was also decided that this musical spectacle shall end with a spectacular Gran Finale, namely fireworks synchronised with music.

In 2004, the Saint Lawrence Band Club performed the following music, whilst the Overture 1812 was chosen for the Gran Finale synchronised with fireworks. 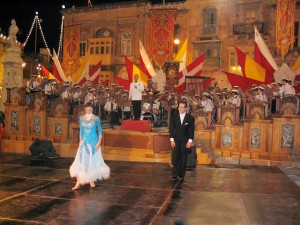 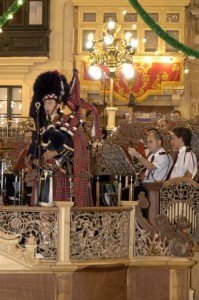 In 2006, the Saint Lawrence Band Club was accompanied in this musical concert by renowned singers Olivia Lewis, Debbie Scerri, Philip Vella, J Anvil and Ludwig Galea. Also, Clifton Vella on Bagpipes, together with dancing company Keith and Adonelle Dancers participated in this spectacle. The 10th August Pyrotechnic Society was responsible for the grand finale, with fireworks synchronised to the music of the Marcia Slava.

In 2007, the Band sub-committee took the innovative decision that the Vittoriosa in Festa musical concert shall be themed. In fact, the first theme to be played was Musicals. The Saint Lawrence Band was accompanied by Aldo Busuttil, Marisa D’Amato, Kimberly Grech, Leontine, Roger Tirazona and Mark Tonna. Added to these, Mario Ciantar on the violin and the dancing group from Vittoriosa Mystic Dance Company animated further the concert. The 10th August Pyrotechnic Society organised synchronised fireworks with the Light Cavalry. 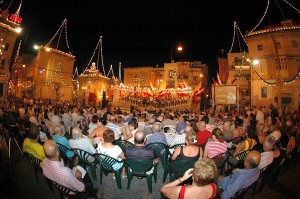 In 2008, the Vittoriosa in Festa was themed with Austrian Waltzes. In fact, Waltzes and other popular songs, including Maltese songs, coloured the night in Vittoriosa especially with the participation of Ludwig Galea, Chiara, J Anvil and Olivia Lewis. The Waltzes were animated professionally by Pro Touch Dance School. The 10th August Pyrotechnic Society chose the Radetsky for its now traditional Gran Finale. 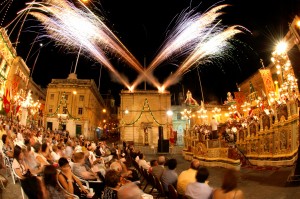 In 2009, the theme chosen was Italian Music. The following singers participated with the Saint Lawrence Band; Ivan Attard, J Anvil, Neville Refalo and Debbie Scerri. Mario Ciantar on the violin and Veninmalte dancing company further animated this concert. The 10th August pyrotechnic Society once more was in charge with the Gran Finale with fireworks synchronised to the popular masterpiece William Tell. 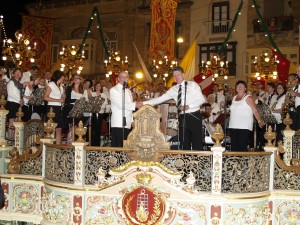 The 2010 Vittoriosa in Festa can be considered as rather a special one. The reason is that together with the Saint Lawrence Band Club, the Philharmonie Royale Concordia also participated in this international concert in front of a record audience. This Philharmonie Royale Concordia was in Malta as part of a musical exchange which saw the Saint Lawrence Band Club visiting Belgium in December of the same year. Whilst the Maltese band performed solely Maltese music, the foreign band played international music. The 10th August pyrotechnic society took care of the Gran Finale, with synchronised fireworks accompanying the musical piece the Best of Maltese Folklore. 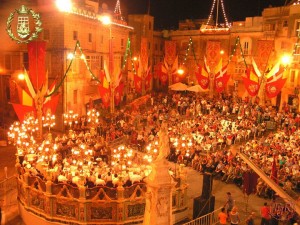 The 2011 Vittoriosa in Festa was themes ‘The Americas’, where all the music performed originated from the American Continent. For yet another time, this was an original theme which all attendees found particularly pleasing, given the variety of musical pieces performed as shown below. The Saint Lawrence Band Club, under the baton of Mro Paul Schembri, was accompanied by singers Ludwig Galea, Neville Refalo, Great Attard and Donna Marie Ellul, violinist Mario Ciantar and Keith Dance Studio. The 10th August Pyrotechnics Society was in charge of the usual Gran Finale with Pirates of the Caribbean. 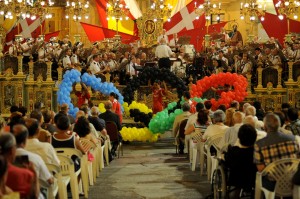 The 2012 Vittoriosa in Festa was one of the best hits ever, being described as one of the most beautiful and musically excellent concerts. This year’s original theme was Sports n‘ Music, and performed music originated from Olympic Games, World Cups and others who are synonymous with the world of Sports. The Saint Lawrence Band Club was accompanied with animation and choreography from Keith Dance Studio, and member from the Vittoriosa Stars Youth Nursery. The spectacular ending was once again trusted to the 10th August Pyrotechnical Society. 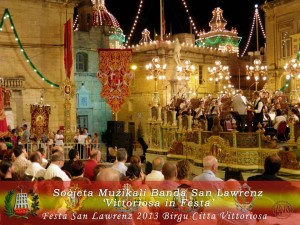 Once again, the band sub-committee succeeded in being original in the 2013 Vittoriosa in Festa. Themed as 80s Flash Back, this musical concert took a walk down memory lane where all attendees listened to music pieces originating from the 80s decade. This was yet another stone in confirming the popularity of this annual event. The Saint Lawrence Band Club was under the baton of Mro Paul Schembri and Assistant Director Mro Ugo Buhagiar, and was accompanied by Ludwig Galea, Debbie Scerri, Janvil, Laura Bruno and Geordie Debono. The concert was animated by Mystic Dancers, Guitarist David Borg and Future Voices children Choir. With the collaboration of the 10th August Pyrotechnic Society, stage fireworks and coloured paper were used for a spectacular ending.

The 2014 Vittoriosa in Festa can be easily described one of the best, if not the best, musical concerts ever in Vittoriosa. With musical pieces ranging from modern to classical music, from one nation to the next, the theme The EU in Concert was nevertheless original. The band sub-committee decided to go for this theme in commemoration of the 10th Anniversary of Malta’s membership in the EU, the 50th Anniversary of the Independence, the 40th Anniversary of the Republic and also the 35th Anniversary of Freedom Day. The latter anniversaries were commemorated with the band playing highlights from Ġensna, the popular Maltese Rock Opera. The Saint Lawrence Band was accompanied by Aldo Busuttil, Debbie Scerri, Iona Dalli, Ismael Grech, Future Voices Children Choir, Keith Dance Studio and animation with EU Member States flags from Mystic Dancers. Also, this was the last concert to be conducted by Mro Paul Schembri. 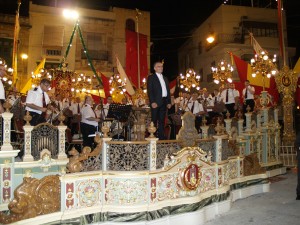 The 2015 Vittoriosa in Festa had a starch difference from all the other programmes held by the Saint Lawrence Band Club. In fact, for the very first time in 35 years, the Saint Lawrence Band Club was not under the baton of Mro Paul Schembri. Mro Jonathan Abela, the new band conductor of the band, was officially appointed at the helm of the band before the beginning of the concert. The Committee of the Saint Lawrence Band Club would have liked to thank properly Mro Paul Schembri in front of the fully packed square, but due to health reasons, Mro Schembri could not attend. Themed as “Hakuna Matata – A Journey Through Disney”, this musical concert took the audience to their childhood, with all the music pieces originating or used in Walt Disney movies. The Saint Lawrence Band was accompanied by Janvil, Tiziana Calleja, Nathalie Pace and animators ‘Centre Stage’, and also the 10th August Pyrotechnic Society.

The 2016 Vittoriosa in Festa can be described for yet another time as original. The theme for this year was ‘El Ritmo Latino’, where the Saint Lawrence Band Club spectacularly performed different styles of music which all fall under the Latin music genre. A particular piece worth mentioning was the Trumpet Solo done by Andrew Zarb, Music teacher and resident musician with the Club, on Cherry Pink and Apple Blossom White, under the baton of Assistant Conductor Francois Borg. The Saint Lawrence Band Club of Vittoriosa was under the Baton of Mro Jonathan Abela, Band conductor. The band was joined by singers Janvil, Ludwig Galea and Alwyn Borg Myatt, accompanied by guitarist Jonathan Ellul and dancers from Happy Days and Pro Touch Dancing Schools.

The 2017 Vittoriosa in Festa, themed and named ‘A Symphony to Victory’, can be described as a fantastic and spectacular audio-visual 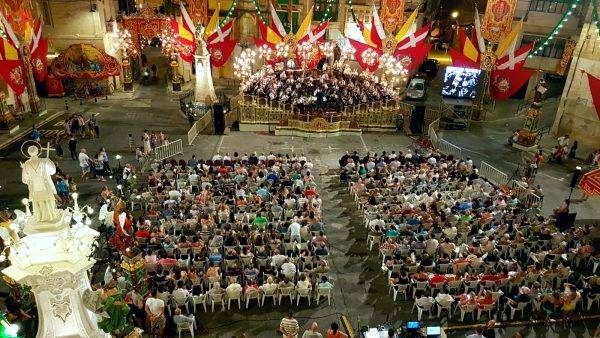 show. The musical programme was a huge success with Maestro Jonathan Abela conducting a variety of  music accompanied by singers Tiziana Calleja, Christian Arding, Centre Stage and violinist Valhmor Montfort. In Vittoriosa’s main square practically filled to capacity the crowd cheered and clapped to the rhythm of the Vittoriosa Band. A musical programme which confirmed the dynamism of the Vittoriosa Band even through the various Solos performed by Club’s musical directors, Francois Borg and Andrew Zarb. 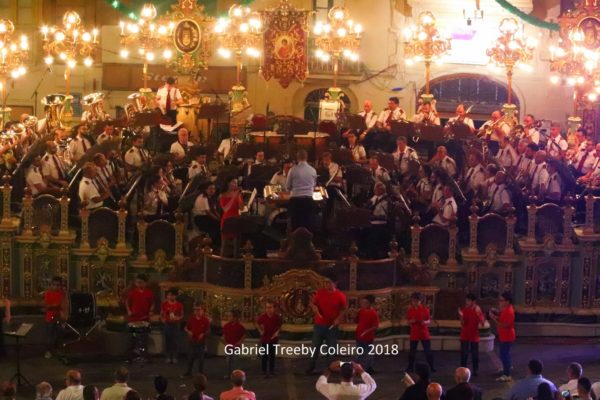 The 2018 Vittoriosa in Festa Concert was themed as ‘Clash of the Centuries’. With popular hits from the 20th century in clash with other hits from the 21st century, this musical concert was innovative in the sense that conductor Mro Jonathan Abela and Assistant Conductor Mro Francois Borg, together with the Saint Lawrence Band, took the audience on a journey through the most popular hits of different music styles of the last 100 years.  The Saint Lawrence Band was accompanied by singers Ozzylino, Jasmine, Christian Arding and Lello Ebejer, popular guitarist Marc Galea, Dancing Angels and music students of the band club. It must also be said that Saint Lawrence Band was joined by the Associazione Culturale Musicale Bandistica Synphonica Citta` di Viagrande in the march before the concert. The Saint Lawrence Band played the following repertoire. 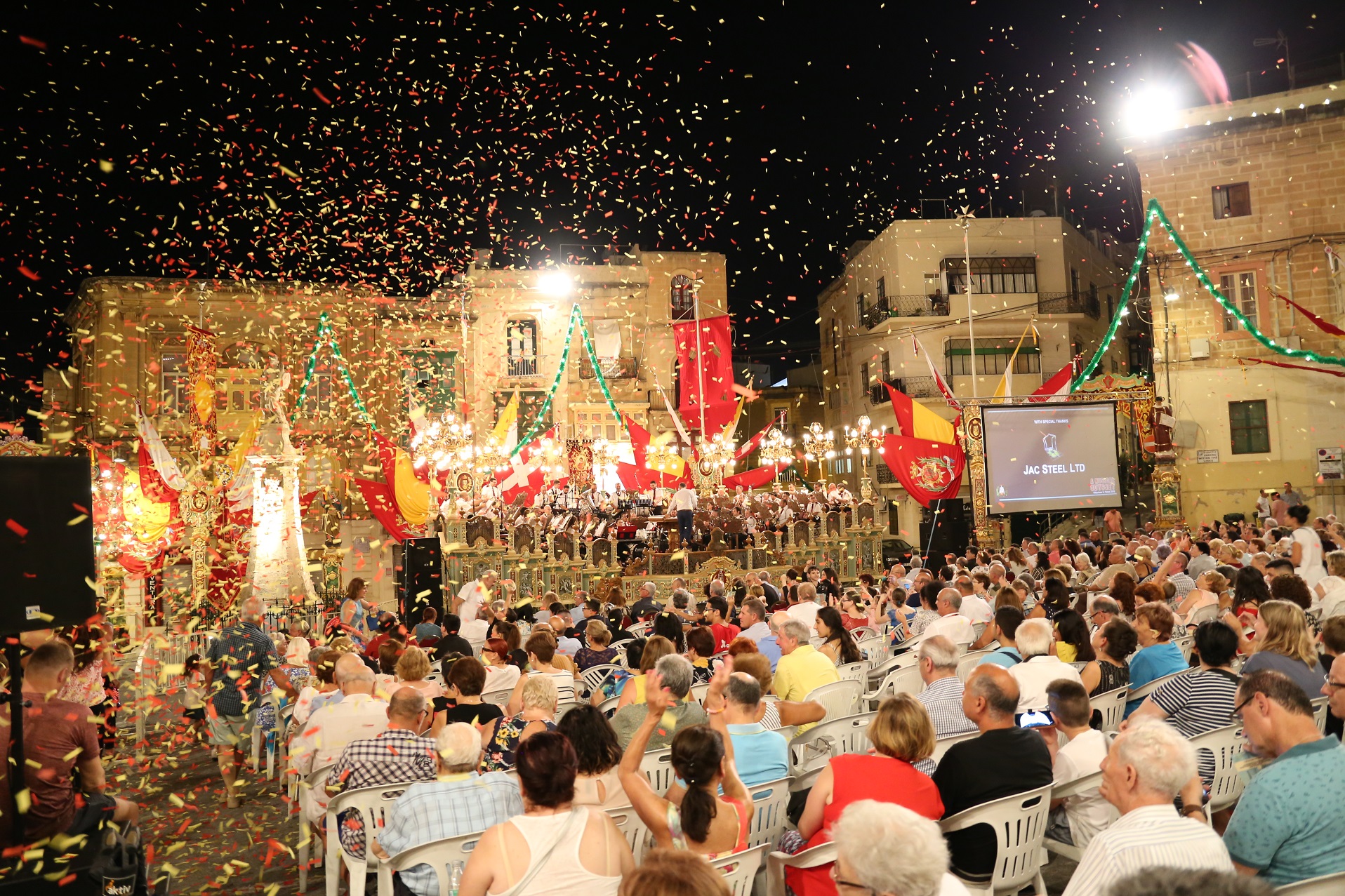